Click here to learn more about our organization.
Learn More

Join in! Walk and Roll is a yearly event.
Sign Up

Prader-Willi syndrome (PWS) is the most common known genetic cause of life-threatening obesity in children. PWS is the result of an abnormality on the 15th chromosome. PWS affects approximately 1:15,000 births and occurs equally between males and females and affects all races.

PWS disrupts the normal functions of a portion of the brain called the hypothalamus.  The hypothalamus controls the body’s ability to regulate temperature, blood pressure, heart rate, and hormone release which affects the body’s metabolism, sleep regulation, appetite, learning, memory and social behavior.

Common characteristics of PWS are low muscle tone, motor and developmental delays, short stature, and incomplete sexual development. Most children begin treatment with Human Growth Hormone (HGH) shortly after diagnosis. HGH helps not only with increasing muscle mass and strength, but helps to redistribute fat to appropriate areas of the body and also improves brain development and learning.

PWS has been historically known as a two stage syndrome. The first stage occurs during infancy. Babies are most often diagnosed as “failure to thrive” due to their poor feeding and hypotonia (low muscle tone). Babies with PWS would often not survive without extreme interventions. Most babies spend the first few weeks of live in Intensive Care Nurseries, cared for around the clock. 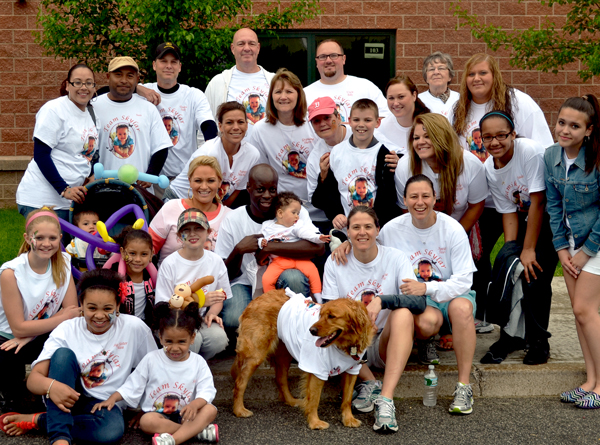 They are fed via feeding tubes either through the nose or directly into the stomach. During this stage, therapies help to strengthen the babies weak muscle system, including physical and occupation therapy, are vital. Feeding and/or speech therapy are also valuable in strengthening the oral-motor muscles.

As infants with PWS grow into toddlers and school aged children, therapies continue to be imperative. Birth to 3 services such as continued physical, occupational and speech therapies will help children reach their milestones. Behavioral Therapy can improve anxiety, another hallmark of the disease, and other therapies like Hippotherapy, physical and occupational therapy while horseback riding, are also wonderful resources to help children with PWS reach their potential.

The second stage of PWS is characterized by the development of hyperphagia, an uncontrollable drive to eat, combined with weight gain while consuming fewer calories. This is the most common characteristic of PWS… uncontrolled hunger. This has been known to occur in children as early as 3 years old. However, research has shown that children on GH develop an insatiable appetite later in childhood.

More recent research describes that there are more than just two phases of PWS.

PWSA (USA) has outlined the breakdown of five main phases and their sub phases:

FIRST PHASE the infant is hypotonic and not obese.
SECOND PHASE occurs when the weight starts to increase and crosses percentile lines in the normal weight curve. This generally begins between 18-36 months of age.
THIRD PHASE (median age of onset is 8.0 years and lasts into adulthood) is the development of an insatiable appetite/drive to eat, accompanied by intense or relentless food-seeking. This is the classic phase most people typically associate with PWS, but its onset is actually quite variable in PWS. It may appear as early as 3 years of age or as late as 15 years of age. This phase can be managed by the presence of appropriate environmental interventions (usually including locked food access) and psychological food security.

FOURTH PHASE may occur in later adulthood when an individual who was previously in phase 3 no longer has an insatiable appetite and can feel full. Families and care takers note a significant improvement in appetite and weight control. Phase 4 only occurs in a minority and most of adult individuals with PWS will remain in phase 3.